I can not say enough positive things about the staff of Steampunk World’s Fair. It was everything else that went wrong.

So, first there was pouring rain during set up. Made the traffic to get there horrible, and we showed up just before the show was supposed to open. Steampunk World’s Fair has a vendor set up different from any other show we have done. There were several different places that vendor tables and booths could be set up – ballrooms in each of the two hotels, first floor rooms in the hotels, hallways in the hotels, and the outdoor midway between the two hotels. We were located in the midway. Which, if the weather had been nice, would have been a really neat place. There were a lot of vendors and the main stage, giving the whole area a really festive feel.

I didn’t have time to catch many costume photos, but I loved this Spidey.

We were allowed to pull up even though we were late, rush set up in the rain, and were ready to go. The weather cleared, and Friday night was awesome. It also is one of the few shows we do that goes to after dark. That means good booth lighting if you are outdoors is a must. 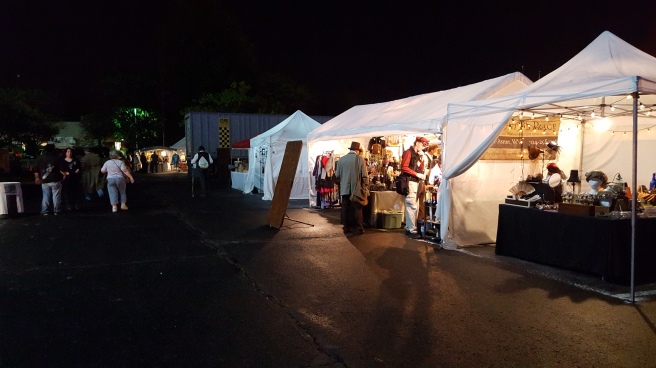 Friday night at the World’s Fair. The booth lighting and the concerts made this so festive.

Saturday started good, but then the clouds and wind really picked up. Rain is manageable, but wind is complete havoc on an outside show. About 4:30 the clouds got really, really dark and we found out about a lightning storm coming in. So with all of us with metal tents, we were told to evacuate the midway.

This was another time the staff was awesome, as well as the guests. We had so many helping hands to first get our inventory packed up and inside, and then getting the tent taken down and into the van. We waited out the storm from the van, then came back about 7 to set back up. A bunch of other vendors did not return that night… which, since it was also a big concert night, made it the best part of our sales. 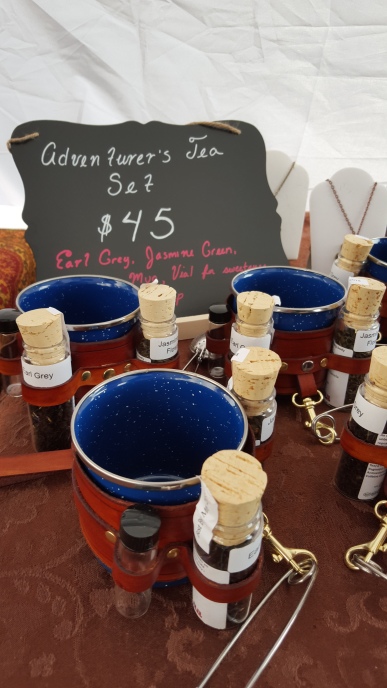 Adventurer’s tea sets – one of my big hits of the fair. 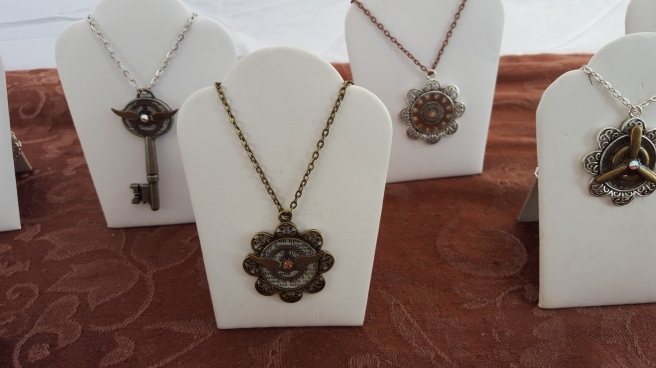 Plastic refinished toy guns – a lot of these still made the ridiculous sound effects.

Unfortunately, setting back up also resulted in a call from the staff at 2:30 in the morning. The wind had picked back up and our tent had tried to make a break for it. The staff was awesome – we showed back up to find everything broken down and anything that might blow away weighted down. We packed up and got what sleep we could.

Which leads us to Sunday. First, the adventure of getting to the show. The convention was right near Rutger’s University, and that day was their commencement. On top of that, the speaker was President Obama, which meant all sorts of road blocks. We got lucky – a cop managing one of the blocks recognized us as heading to Steampunk World’s Fair, and gave us directions that would get us there. Other visitors were not so lucky.

We made it back out the try and set up again to find even fewer vendors outside. The wind was vicious. We and one of our neighbors gave up on attempting tents after they tried to blow away the moment we tried to set them up, and went for just tables and product, yard sale style. About an hour of that, and the vendor coordinator offered those of us who wanted to move tables in one of the hallways.

So, we condensed our 10 ft by 10 ft booth inventory to a single table as best we could, but at least we still had the chance to sell all three days.

Light up knives and whatever we could fit on the hallway table. 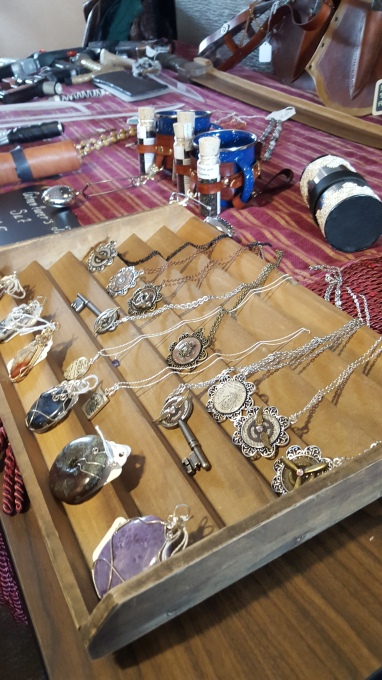 And above all else, we have to say, this staff was awesome.

One thought on “Steampunk World’s Fair 2016”

Meet my neighbor! I love getting inspired by wildlife around me. This gopher tortoise was annoyed I interrupted his meal this morning.
Using the backup tent at Brevard Renaissance Fair while our period one is still being cleaned. What do you think for making a carport look medieval-ish? #boothphoto #displaydesign #renaissancefestival #renaissancefaire #wyrdarmouries #brevardrenaissancefair
Another sign painting day! The old renaissance faire booth sign was showing its age. So today I finished painting this! It will be added to our Brevard Renaissance Fair booth this weekend.
After a completely silly moment, I give you... snails go to the renaissance faire!
Sold most of these in the cold rain yesterday, but I love my cheerful rainbow of short cloaks!
I am always amused how our booth changes from weekend to weekend depending on what we had time to make. This was a cloaks week!